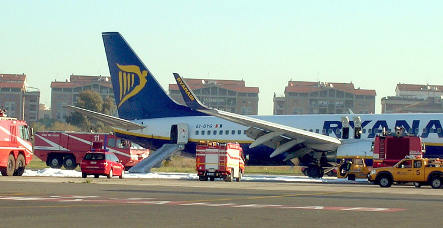 Firefighters rushed to the aircraft as its occupants leaped out of the emergency exits and down escape chutes. The airport – used by most low-fare airlines serving Rome – was closed.

First indications pointed to a faulty landing gear on the Boeing 737 as the cause of the accident, but passengers quoted by ANSA later blamed an engine malfunction possibly caused by the impact with birds.

“I saw flames coming out of one engine as we were landing, and we were told later that a flock of birds was probably to blame,” Guglielmo Albertini said.

“There was a smell of burning, and there was a little bit of panic among the passengers,” another passenger said. “When we got out we saw traces of blood on the wings.”

The aircraft touched down on the runway, skidded off and then came back on to the tarmac, ending up with one engine on the ground after part of the landing gear collapsed.