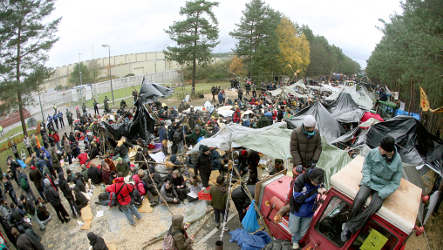 Hundreds of activists camp out near Gorleben. Photo: DPA

Over the weekend about 15,000 activists staged the largest and most violent anti-nuclear protests seen in Germany since 2001, setting fire to barricades on train tracks in the north of the country to prevent the transport of the radioactive waste. Meanwhile some 16,000 police were deployed across the region to ensure the load reached the facility safely, reportedly using force with truncheons to beat back environmentalists blocking the way.

On Monday morning, protestors were still on hand at a Dannenburg depot, where the waste had been transferred overnight from train cars to trucks for final transport to Gorleben just 20 kilometres away.

Twelve Greenpeace activists reportedly chained themselves to a truck at Dannenburg to prevent its depature, police reported. Meanwhile several hundred protestors blocked the road in Laase and erected two cement pyramids to block trucks from passing near Grippel. In Quickborn anti-nuclear protestors used 40 tractors to block the road. Police reported they had arrested four people.

By late morning most of the twelve transport trucks full of radioactive material had left the Dannenburg site, where it had arrived 14 hours late from a retreatment centre in western France on Friday.