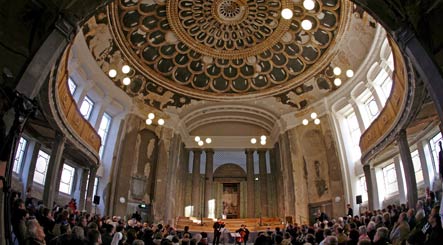 Chancellor Angela Merkel and Jewish leaders gathered at Germany’s biggest synagogue to pay tribute to the victims of Kristallnacht on November 9-10, 1938 and to the revival of a Jewish community against all odds.

The leader of the Central Council of Jews, Charlotte Knobloch, said she hoped a reminder of the atrocities would rekindle Germans’ commitment to tolerance in the face of a resurgent far-right.

“It is our responsibility to keep the memories alive,” Knobloch, who witnessed Kristallnacht as a six-year-old in the southern city of Munich, told the congregation of some 1,200 people at Berlin’s Rykestrasse synagogue. “Six million children, women and men must never be degraded to a footnote of history,” she said, referring to those slaughtered in the Nazis’ bid to

The pogrom, also known as the Night of Broken Glass, saw Nazi thugs plunder Jewish businesses throughout Germany, torch some 300 synagogues and round up some 30,000 Jewish men for deportation to concentration camps.

“From that moment on, Jews knew that those who could must save themselves,” survivor Betty Alsberg, an 88-year-old who now lives in Israel, told AFP this week.

Historians say the Nazis tested the German public’s reaction to the spasm of anti-Semitic violence and the lack of public outcry led them to press on, culminating in the extermination campaign launched three years later.

Pope Benedict XVI recalled the agony he felt as a boy growing up in Nazi Germany and urged younger generations to shun all forms of discrimination. “Even today, I feel pain for what happened in these tragic circumstances, of which the memory must serve to ensure that such horrors never occur again,” he said at the Vatican.

After national unification in 1990, Germany began accepting Jewish immigrants from the former Soviet states and the country now has one of the fastest growing Jewish communities in the world with some 110,000 members.

But Knobloch cited the desecration of Jewish cemeteries in Germany at the rate of one per week, Iran’s threats against Israel and the gains of neo-Nazi parties in German elections as signs of pernicious anti-Semitism.

Kristallnacht commemorations were held throughout Germany, in other European cities including Vienna as well as in Israel. Two new synagogues were to open in Germany, in the northern city of Göttingen and Lörrach in the south.

“It is anything but self-evident that new synagogues are being inaugurated in Germany,” Merkel told the ceremony at the Rykestrasse synagogue. “That makes me that much more grateful for it.”

The Rykestrasse house of worship reopened in Berlin in August 2007 after a major restoration, as a defiant symbol of a Jewish revival in the city where the Holocaust was planned. It was one of the few Jewish institutions in the city to survive Kristallnacht. It was only spared because it was between “Aryan” blocks of flats which might have caught fire had the synagogue been firebombed.

But its precious Torah rolls were damaged and rabbis as well as congregation members were captured and deported to the Sachsenhausen concentration camp north of Berlin.

Because it shares the same date, the fall of the Berlin Wall in 1989 was also marked Sunday at low-key events ahead of the 20th anniversary next year.