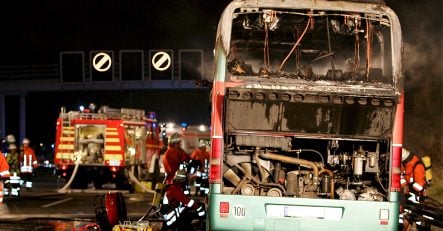 One of the 13 survivors of the country’s worst bus accident in 16 years reported seeing the bus bathroom burst into flames shortly after a passenger had used it, leading police to speculate that the fire may have been caused by a cigarette.

But fire experts, who said their investigation timeline remained indefinite, now believe a technical defect was a more likely cause to the fire on the A2 motorway.

Meanwhile, the German association of omnibus companies BDO announced on Friday that all new buses equipped with bathrooms will be required to have smoke detectors installed from now on.

This way, “travelers and personnel will be informed early about possible smoke and fire outbreaks,” a statement said. BDO also encouraged voluntary smoke alarm fittings for buses already in use.

The bus was returning from a day trip to the Prikings-Hof pig farm near Dortmund, 235 kilometres (145 miles) west of Hannover, a popular destination for coach trips with rustic food and music. The bodies of the mostly elderly passengers are still being identified because they were so badly burned.