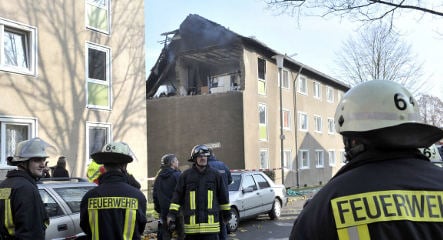 Firemen assess the damage after the explosion. Photo: DPA

More than 100 rescue workers were on the scene after a top floor apartment blew up, putting the entire building in danger of collapse.

Fire department workers have not yet determined the cause of the explosion that killed the 24-year-old man who lived in the apartment and injured five bystanders. Another 10 residents registered at the building were not home at the time of the accident.

According to eyewitness reports, pieces of the roof and outer walls of the building sailed through the air and onto the street while the top floor apartment burned.

“We know for a fact that there wasn’t a gas line in the house,” said a fire brigade spokesman.

The building is not safe for residents to return to their homes and authorities continue to assess costs of the damage. Other nearby homes may also be damaged.