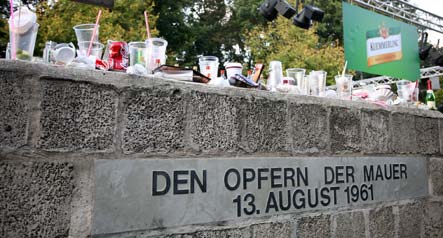 A memorial to victims of the Berlin Wall. Photo: DPA

The wall, constructed by the former East German communist government in 1961, fell on November 9, 1989, paving the way for the reunification of the two halves of Germany one year later.

But today’s German youth show little interest for the history of East Germany, prompting politicians to worry about the risk short memories pose to democracy.

“From year to year, the GDR (the German Democratic Republic as communist East Germany was known) becomes ever more beautiful. Many now remember it as a gentle country where there was full employment,” the Berliner Kurier newspaper recently noted tongue-in-cheek.

“East Germany’s image is fast fading. And there’s ever less importance attached to the role played by the (communist party) or by the Stasi” the secret police, according to political scientist Uwe Hillmer. More and more people think of East Germany as “neither a democracy, nor a dictatorship,” he added.

And the fact that some former East German politicians have now managed a comeback, with many joining the new hard-line socialist Left party, makes it more difficult to assess East Germany’s history in an objective fashion.

For the government body responsible for preserving Stasi archives, Germans have moved on from believing in the 1990s that “not everything was bad in East Germany” to asking “what was really bad?”

A recent survey conducted by the Berlin Free University (FU) also made clear how little young people know about the former communist regime, set up in eastern Germany by Soviet occupying forces after World War II. According to the survey, half of 15 to 17-year-olds in eastern Germany do not think of the GDR as a dictatorship. In western Germany the figure is one in three. And half the 5,200 children polled think the Stasi served simply as an ordinary intelligence agency, forgetting it spent much of time and effort spying on citizens at home.

A majority of German schoolchildren do not even know when or who built the Berlin Wall, a 155-kilometre (97-mile) stretch of reinforced concrete and barbed wire which was part of the “Iron Curtain” that cut through Europe, dividing it into “East” and “West” for more than 40 years, the survey shows.

Only one in three of those living in the east knows it was built by the GDR government, with others thinking it was built either by West Germany or by its Western allies.

Young people also mix up politicians, with a quarter believing that former West German chancellor Willy Brandt, known for his policy of detente towards the East, was an East German communist leader. Some even think Adolf Hitler headed East Germany, according to some other polls.

Teaching modern German history is a challenge, especially in eastern Germany when it comes to discussing the role played by the former communist government, according to Hillmer. “In a number of schools, some teachers still argue that the GDR wasn’t all that bad,” he added.

According to the FU survey, children in Germany’s southern state of Bavaria know more about East Germany’s past than those living there. And according to Hillmer, it is not just the children who are confused. Adults too “have a big problem appreciating the past” and with some dreamily looking back on an East German “social paradise” where everyone had a job and a home and choosing to forget about the dictatorship aspect, Hillmer said.

The curator of the GDR museum, Stefan Wolle, considers this all the more surprising as people living in the East were daily confronted with the police state.

“The party was always getting involved in private affairs. Marriage problems, divorce, alcoholism, the small misdeeds of children – everything came was discussed at party meetings,” he recently said in a newspaper article.

As for people in the West, “a lot of them chose to forget about East Germany’s history because they simply don’t care”, according to Hillmer.