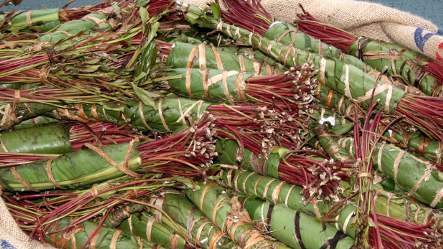 This is Khat. This is your brain on Khat. Any questions? Photo: DPA

The 36-year-old driver from the Netherlands was pulled over on the A7 motorway near the town of Schleswig with 20 burlap bags of the drug. The Khat, a flowering plant that has amphetamine-like effects when chewed, was for medicinal use in Norway, the man told police.

Police from Flensburg arrested the driver, who was also in posession of 640 vials of liquid Ecstasy. The entire drug stash was worth some €400,000.

Khat is native to Eastern Africa and the Middle East, where it is used widely. The leaves are chewed for hours to release the stimulant cathinone, which causes euporia and can be addictive. It has been outlawed in Germany since 1988.