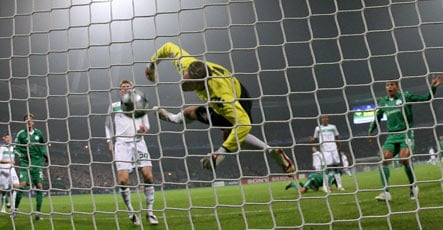 “We do not need to hide anything, we were completely outplayed and we didn’t finish any of the opportunities we created ourselves,” said bitterly disappointed Bremen coach Thomas Schaaf. “That was a huge disappointment.”

And midfielder Frank Baumann summed up the team’s low mood: “We wanted to get three points and improve our position in the table, but we totally flopped.”

But the Greeks were all smiles after their impressive win with Dutch coach Henk ten Cate giving a wry grin before saying: “I am very pleased, the boys did well.”

Greek striker Evangelos Mantzios – the scourge of Bremen with his two goals in the 2-2 draw in Athens a fortnight ago – grabbed the first on 58 minutes before midfielder Georgios Karagounis hit a wonderful volley 12 minutes later. And Bremen were sent crashing to the bottom of the group when Alexandros Tziolis hit the third from just outside the penalty area with 83 minutes gone.

Before Tuesday night’s clash at the Weserstadion, Panathinaikos had just one point in Group B after their defeats to Inter Milan and Anorthosis Famagusta plus their draw with Bremen in Athens a fortnight ago. But his side went some way to taking the pressure off ten Cate with a

After a lacklustre first-half from both sides, the game finally burst into life when Panathinaikos strung together some decent attacking football. Mantzios broke the deadlock when he slotted home after a finely-weighted through ball from Tziolis.

It gave Bremen goalkeeper Tim Wiese precious little chance and Werder’s shot-stopper was left red faced again on 70 minutes when Jose Sarriegi’s throw in was met by Karagounis who hit a breath-taking dipping volley from the left corner of the box to double the Greek side’s lead.

And Panathinaikos put themselves right back in contention to reach the competition’s first knock-out phase next year when Tziolis found the bottom corner on 83 minutes despite slipping as he fired the ball home.

Having well and truly slipped on the Greek banana skin, Bremen are now in a precarious position with two games left at Famagusta later this month and home to Inter Milan in December.

But Panathinaikos have at least given themselves a fighting chance of making the next round with ties at Inter and home to Famagusta.