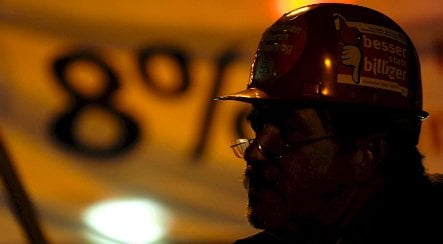 The country’s largest industrial union is pressuring employers to raise wages by eight percent for some 3.6 million workers – the most it has asked for in 16 years. The employer’s federation rejected the demand for an eight percent raise, arguing that companies would have to shed jobs if wages rise too much due to the economic crisis and weakening economy. Instead, employers have offered a 2.9 percent pay increase.

At midnight, workers at Bosch, Siemens and Valeo walked off the job in cities across Bavaria. Meanwhile, in the wave of strikes that began on Sunday, workers in the Baden-Württemberg town of Nagold didn’t show up for their early shift at auto supplier Helag. Workers at saw manufacturer Stihl in Waiblingen have also laid down their tools temporarily. Auto manufacturer Daimler workers in Düsseldorf walked off during their night shift around 4 am.

“We estimate there will tens of thousands of participants,” a spokesperson for the union said of the Monday strikes. About 100 companies will be affected, with 30,000 workers on strike in the states of Hessen, Rhineland-Palatinate, Thuringia, Baden-Württemberg, North Rhine-Westphalia and Saarland.

The fourth round of wage talks is scheduled for November 11 in Dortmund. If IG Metall fails to reach an agreement with employers, the union may hold a member vote as to whether they will strike indefinitely.