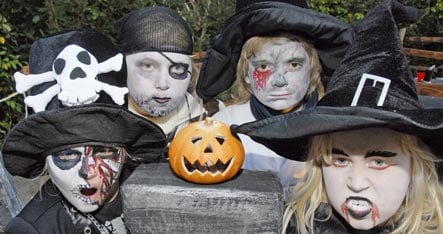 Bavarian officials chose not to make any exceptions from the state’s holiday law this year for Halloween. All Saints Day is one of the nine “silent days” for the Catholic Church and celebrations are only allowed if they are of a “serious character,” according to Interior Ministry spokesman Oliver Platzer. “That wasn’t the case anymore in the last few years,” he said.

With more of Halloween’s monstrous fun spreading to Germany each year, deeply Catholic Bavaria has apparently decided to put an end to the ghoulish celebrations.

Some 50 Halloween parties have been announced in and around Munich alone, but state officials are determined to decapitate them at the stroke of midnight.

“Halloween is just a sham. The grinning pumpkins are hollow, there’s nothing in them and nothing to it,” said Bavarian Bishop Johannes Friedrich. “Naturally, we don’t want to spoil the kids’ fun.”

But that same sentiment doesn’t seem to apply to adult fun. Restaurant and pub owners have protested against the new regulation amid fears they will suffer a bloody massacre on Friday night. “Most people don’t show up until ten. And we can’t really demand a cover fee for two hours,” said Wolfgang Ettich, a pub owner thought to have organized Munich’s first Halloween party 25 years ago.

However, some Halloween fans think they have found a loophole allowing private groups to get around the holiday ordinance, like the “Social Tolerance Bavaria” association, which will hold four private events staying open later and flouting the ban on dancing and music. But Halloween’s resurrection might be premature.

“That isn’t completely legal and the police will check on these events,” said Munich municipal official Klaus Kirchmann.

Apparently no one has explained to Bavaria’s fun-killers what happens if Halloween ghouls and goblins don’t get their treats.