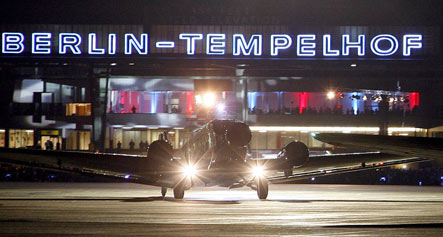 Tempelhof, just south of the city centre, is a potent symbol of the days when free West Berlin was a Cold War outpost embedded in the Soviet bloc and of the city’s survival, thanks to the massive aid of the Western allies.

After 85 years of service, Tempelhof was to see the final take-offs just before midnight of two vintage planes bound for Schönefeld, former East Germany’s main airport and the site of the planned new airport on the city’s southern outskirts due to open in 2011.

Some 800 political officials and business leaders gathered at the main terminal for a gala dinner accompanied by 1940s swing music to mark the end of an era. But hundreds of protesters demonstrated outside with a candlelight vigil in a cold drizzle against the closure, charging that the German capital was sacrificing a vital part of its history.

Mayor Klaus Wowereit told the invited guests that having an airport in the heart of the city was no longer suitable for a 21st century capital, although Tempelhof would always hold a special place in the hearts of Berliners. “Tonight is emotionally charged and that is something that must be respected,” he said as a handful of guests booed and whistled at his outspoken defence of the closure.

A last-ditch referendum to preserve Tempelhof, which British architect Norman Foster calls “the mother of all airports” for its legacy, size and beauty, failed in April despite 530,000 votes in its favour.

Tempelhof’s history reaches back to the origins of aviation and its development mirrored the city’s own tumultuous course over the decades. Flight pioneer Orville Wright lifted off for a few minutes in a primitive plane from here on September 4, 1904.

The airport opened for passenger flights in 1923 and the Nazis expanded the site in 1936, constructing the largest building in western Europe as a monumental gateway to the Third Reich.

The Soviets occupied Tempelhof briefly at the end of World War II before the US army took over as it was located in the city’s American sector. In the airport’s finest hour, the Americans, with the help of the British and the French, mounted an unprecedented airlift in 1948-49 after Stalin blockaded the three free western sectors in an attempt to starve them into submission.

Passenger travel resumed in the 1950s and Elvis Presley as well as Hollywood legends Gary Cooper, Marilyn Monroe, Billy Wilder and Marlene Dietrich were among the many guests to step out onto the tarmac greeted by cheering throngs over the years.

After the Berlin Wall was built in 1961 and West Berlin became an isolated island suspended in communist East Germany, flights from Tempelhof were a ticket out. But following reunification in 1990, Berlin and the surrounding state of Brandenburg agreed to build a large new airport to serve the united capital, marking the beginning of a long decline for Tempelhof.

The landmark terminal will not face the wrecking ball as it is a listed building, but the future of the sprawling site is uncertain. The city is accepting proposals until January. Ideas include a biotech park, film studios, a “green” residential development, a mammoth solar energy facility, a zoo with cages mounted on the former runways and even the world’s biggest skateboard track.