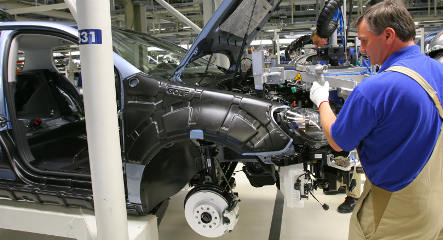 The biggest European car maker said its nine-month net profit had gained 28.5 percent to €3.7 billion by comparison with the equivalent figure last year, on sales which rose by 5.5 percent to €85.4 billion. Operating profit was 15 percent higher at 4.9 billion euros, the company said in a statement.

The results, which included figures from the Swedish truck maker Scania for the first time, were in line with or exceeded forecasts by analysts polled by Dow Jones Newswires.

“Volkswagen has performed well so far in a difficult environment,” the statement quoted VW chairman Martin Winterkorn as saying. “For the current year, the board of managment continues to expect that deliveries, sales revenue and operating profit will exceed the previous year’s figures.”

With its nine-month results, VW has risen among the top three car makers in the world, along with General Motors and Toyota. It has benefited particularly from a strong presence in emerging markets like China, Brazil, and eastern Europe.

The statement quoted financial director Hans Dieter Pötsch as saying: “We are confirming our forecast for 2008, despite the dramatic deterioration in global economic conditions and the automotive industry environment in recent months.”

Many auto manufacturers have announced temporary layoffs or have cut their earnings forecasts in the past few weeks, and last week, Winterkorn warned again that 2009 would be a particularly “difficult” year.

VW shares which have been posting sharp gains and losses this week, rose by 7.03 percent to €553.37 in morning trading, while the Dax index of leading German stocks was up by 3.19 percent overall.

VW is in the process of being taken over by the luxury sports car maker Porsche, which already owns a direct stake of 42 percent and controls a total of 74 percent when stock options are included.