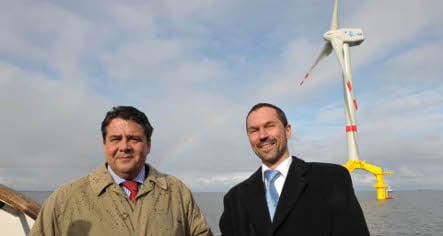 Gabriel on Tuesday afternoon pressed the start button at the Hooksiel complex some 500 metres (500 yards) off Germany’s North Sea coast. The five megawatts produced at the pilot site will flow into the gas and electrical station in the coastal city of Wilhelmshaven, enough to serve 5,000 households.

“Offshore wind power is of key importance for our future energy supply and a decisive factor in achieving our expansion goals for renewable energy,” Gabriel said. “The start of operations at this pilot plant is an important step that shows we are making progress.”

The Hooksiel plant is intended as a prototype for a park with 80 turbines 100 kilometres off the coast of the North Sea island of Borkum, construction on which is to begin early next year.

Britain, the Netherlands and Denmark all have offshore wind farms. Germany, however, has proved more reluctant due to their relatively high cost but has little choice but to pursue such plans as it is running out of suitable land.

The share of renewable energy used in the production of electricity grew to 14 percent in 2007 from 11.5 percent the previous year, according to the German government, which has targeted 30 percent by 2020 – the most ambitious goal in the European Union.

By 2030, Germany would like to provide 15 percent of households with electricity produced at offshore wind farms, the equivalent of around 25,000 megawatts.