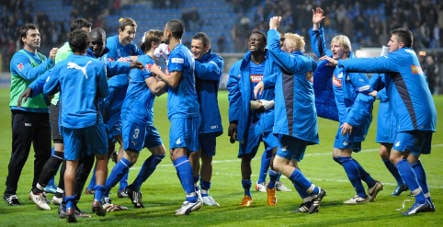 For fans of Hoffenheim’s opponents, multi-millionaire Hopp is the devil who corrupts the federal league – where foreign investors are not permitted – with his money. But Hoffenheim, in south-west Germany, is a village of just 3,000 residents and is the home of the football club where Hopp played in his youth.

To local supporters, he is an angel, making their fairytale come true, especially when Hoffenheim beat title-rivals Hamburg 3-0 last weekend to lead the Bundesliga.

The 68-year-old founder of software giant SAP has funded Hoffenheim’s remarkable rise from obscurity in 1990 when they were in the eighth level of German football to their current place at the peak of the Bundesliga. Along the way, however, Hopp has constantly attracted the ire of some rival supporters.

Borussia Dortmund fans were at the centre of the latest controversy in September when a section of their visiting support used chants and banners to aim abuse at him during Hoffenheim’s 4-1 victory. And a 19-year-old fan was arrested before the game for holding a banner showing Hopp’s face at the centre of a crosshair.

“They have now stepped over the line – there were calls for murder,” said Hopp at the time. “This is no silly little boy’s joke anymore.”

Hopp later dropped the charges after the teenager apologised, but he remains the target of envious rival fans.

Hoffenheim strikers Demba Ba and Chinedu Obasi – from Senegal and Nigeria respectively – have both shown they can create goals as well as finish them. And Bosnia and Herzegovina internationals midfielder Sejad Salihovic and striker Vedad Ibisevic – the league’s top scorer – have played a big part in putting their side top of the league.

Ibisevic’s ten goals in the league so far have attracted the attention of English Premier League giants Manchester United, Everton and Tottenham. “I feel good here and want to stay and score as many goals as possible,” said Vedad.

Two promotions in consecutive seasons have taken Hoffenheim from Germany’s regional league to the Bundesliga summit and work is underway on a new 30,000-seat stadium for the club who curently play at neighbouring Mannheim. Under coach Ralf Rangnick, Hoffenheim have torn up the form book this season as defending champions Bayern Munich have struggled under new coach Jürgen Klinsmann recently.

But despite sitting pretty on top of the league former Schalke coach Rangnick is concentrating on maintaining his side’s form rather than dreaming of winning the Bundesliga title next May.

“I don’t want to think about what happens next May,” he said. “I only think about our next game, we can only concern ourselves with our next opponent.”

Wolfsburg, Schalke and Bayern Munich will all test Hoffenheim’s defence in the run up to the Bundesliga’s winter break in mid-December, but the team from the small village in south west Germany are demanding to be taken seriously. “This team has been together about a year and we have made a few changes, but everyone knows what they have to do,” said Rangnick.

But for Hoffenheim’s fans, long may the fairytale continue.