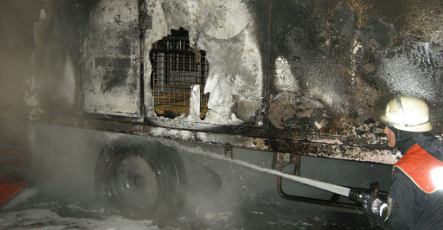 Some 40 fire department workers and additional police quelled the blaze which occurred late on Sunday before it could harm the tigers. The big cats remained calm throughout the ordeal due to their training, which includes jumping through flaming hoops, police said. Circus workers coaxed the cats out of the trailer and the road was closed for an hour during rescue operations.

“Queeni, Aschima, Lena, Sonja, Sibi, and Goldi are very tired but well, having survived the incident without injury,” a statement said, adding that the tigers will take a break from circus performances following the fire.

The tiger trailer was completely destroyed and police estimated damages to be several thousand euros. Preliminary investigation found that a defect in the trailer’s rear axle probably started the fire.