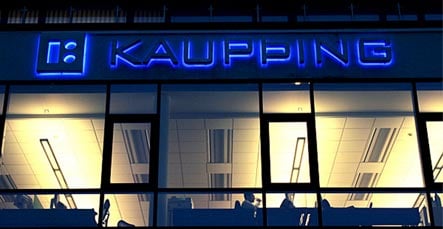 Figures this week from the Bank of International Settlements showed that German banks were by far the most enthusiastic when it came to lending money to Iceland, the Nordic island state teetering on the brink of financial collapse.

Iceland owed banks in Europe’s biggest economy over $21 billion (€16.5 billion), almost a third of the island’s total liabilities and far more than any other country, data from the central banking body showed.

“This was a very surprisingly high number … Iceland only has around 300,000 inhabitants, the same as a town like Wuppertal,” said Konrad Becker, banking analyst at the private Merck Finck bank. “And no one is going to lend Wuppertal $21 billion.

“German banks, even state-owned ones, were not examples of a prudent, conservative way of banking,” Becker told AFP.

The North Atlantic island has been hit hard by the financial crisis, with its government forced to nationalise its three largest banks and seek emergency bailouts from other countries and from the International Monetary Fund.

Germany’s loans to Iceland were five times higher than those of banks in Britain, with regional German bank BayernLB’s liabilities alone exceeding those of all Italy’s main banks combined, according to the Handelsblatt daily.

The figures are from June, but it is unlikely that banks would have been able to reduce significantly their exposure before the financial crisis snowballed in mid-September, analysts said.

And it is not just Iceland. The data also showed that German banks have also been at the forefront of investing in other European countries offering high returns – and high risks – most notably in Ireland and Spain.

Ireland last month became the first eurozone member to be in recession after years of breakneck growth, while the collapse of Spain’s once-booming property market has left many investors with their fingers badly burnt.

German banks have not yet given much detail but if the regional lender BayernLB is any guide – it has written off as worthless €800 million in loans to Iceland – this is going to add considerably to the pain already being felt in other areas.

BayernLB, one of Germany’s Landesbanks, this week became the first lender to seek help from the government’s €480-billion financial rescue package. Hamburg-based HSH Nordbank has since followed suit, and West LB is expected to take up the offer next week.

It is these state-owned lenders that are expected to be at the front of the queue for further bailouts, not private banks like Deutsche Bank or Commerzbank.

Meanwhile, the German finance minister turned up the heat on banks unwilling to take up the government offer. Peer Steinbrück criticized as “irresponsible” their reluctance to take the aid and see the banks fail instead.

“I would consider it irresponsible if a bank board were not to accept the protection offer and deliberately put up with a collapse of their institutions instead,” he told Bild am Sonntag newspaper.