The ears, nose and throat specialist, identified by daily Bild as Dr. Uta S., stands accused of grievous bodily harm for not following proper hygiene regulations. Her patients received a letter from regional authorities urging them to undergo tests for hepatitis and HIV – the virus that causes AIDS.

“The doctor’s assistant at the practice called the health office and accused the doctor of reusing needles on several occasions,” Manuel Zipperer from the Sigmaringen county office told the paper.

Besides reusing needles, Uta S. allegedly mixed patient blood and urine – for them to drink – in a bottle that was then used for other people for the same purpose without being cleaned.

“We believe the doctor treated patients in 682 cases with their own blood without their permission under unsterile conditions,” prosecutor Karl-Josef Diehl said. “Our aim is to forbid her from practising,”

Germany has now seen its total number of reported monkeypox cases hit 3,186. Nearly half of that number—or 1,512—have been reported in Berlin. So far this month though, the number of new cases has been trending downward.

According to “Our World in Data,” the country peaked at a 7-day average (or “incidence”) of around 75 newly reported cases a day in mid-July. By early August, that incidence had decreased to about 45 new cases a day, before settling at around 30 new cases per day recently.

That downward slope broadly mirrors the incidence seen in countries like the UK, France, and Spain—Europe’s hardest hit country.

The United States and overall world totals have seen a couple of days of sharp declines recently, but it may be too early to tell whether that’s part of a longer trend. 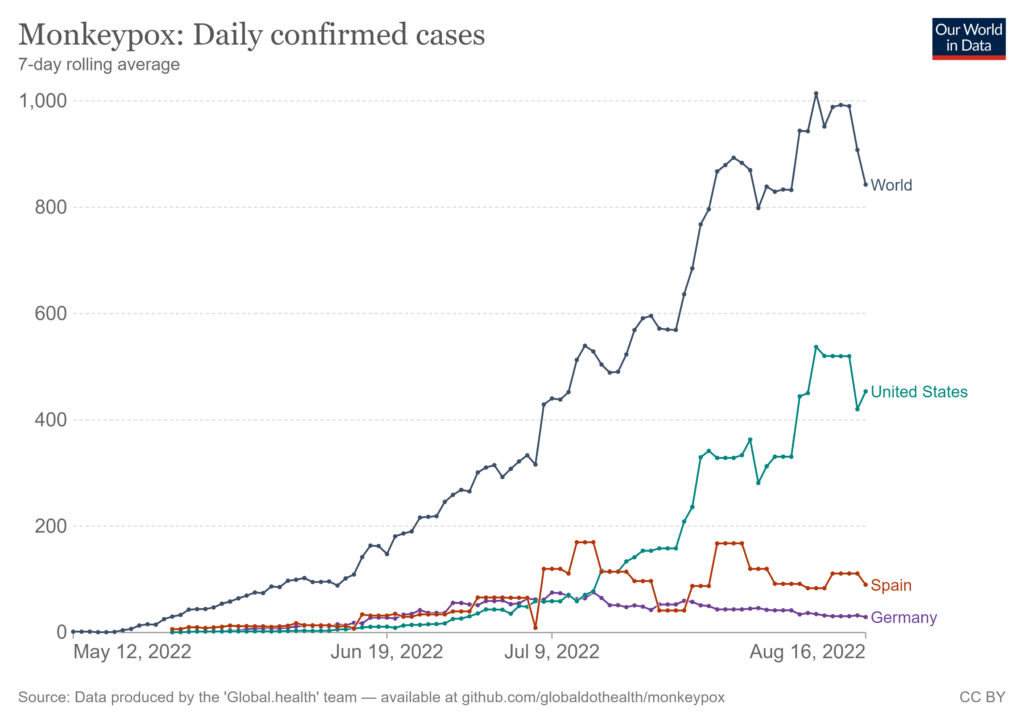 Graph of 7-day rolling averages of monkeypox cases worldwide and in select countries, including Germany. Image via Our World in Data.

Who’s at risk for monkeypox?

The vast majority of monkeypox cases, both in Germany and worldwide, have been detected in gay and bisexual men. Although scientists think there might be some potential for airborne transmission, monkeypox generally spreads through close physical contact.

That’s why gay and bisexual men with multiple sex partners are considered at particular risk.

Germany’s Standing Committee on Vaccination (STIKO) recommends this group get the smallpox vaccine, which also provides good protection against monkeypox.

Those working in laboratory settings are also considered an at-risk group.

People who may have come into contact with a confirmed monkeypox case are also advised to seek a jab within four days of the potential exposure.

Where is Germany with monkeypox vaccination?

Germany ordered 240,000 doses of the Imvanex vaccine back in June, but received an initial delivery of only 40,000 doses. That’s far less than the projected figure of 130,000 people who fall into a risk group.

Since then, deliveries have been trickling in, but still aren’t meeting demand—with waiting lists of people who want the vaccine getting longer.

Hard-hit Berlin received an initial delivery of 8,000 doses, and is waiting for an additional 65,000 to arrive—although vaccination centres have not yet been told when.

The full order of 240,000 doses is currently set to be filled only by the end of September.