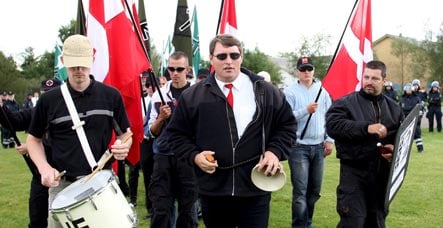 Yes, there are neo-Nazis in Denmark too. Photo: DPA

The judgment was made after the two men, who were granted anonmyity by the court, appealed an October 7 decision by the Danish ministry of justice to approve their extradition to face charges of distributing banned neo-Nazi material.

Danish authorities arrested a 33-year-old German man and a 32-year-old Danish man at the end of August as part of an international crackdown by federal German police to break up a production and distribution network of neo-Nazi recordings.

Frankfurt prosecutors allege they distributed the music in Germany through the Denmark-based record label Celtic Moon. A police raid uncovered thousands of CDs and DVDs at the Danish suspect’s house – many of which contained inflammatory lyrics towards Jews and denying the Holocaust, contrary to German law on incitement to racial hatred.

The Danish suspect appeared in court Tuesday and told judges that he had only been looking after the CDs for his German friend and had never listened to them. He claimed he abandoned right-wing extremism following the birth of his daughter in 2002 and had little contact with his fellow accused.

The German suspect said he was in contact with British neo-Nazi organisation Blood and Honour, but told the court he had “done nothing illegal.”

“In Denmark, we have a freedom of expression that we don’t have in Germany,” he told the court.

German prosecutors argue Celtic Moon and another Danish record label, Nordvind Records, are closely linked to Blood and Honour, which in the past sold neo-Nazi propaganda. Mikael Skjoedt, a lawyer for the Danish suspect, told AFP that the two men would launch a fresh appeal.