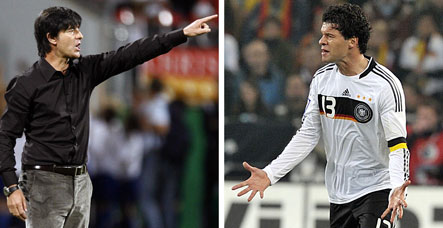 Löw is angry after Ballack criticised him in newspaper Frankfurter Allgemeine Zeitung (FAZ) on Tuesday in which he said the national coach should show his senior players more respect and loyalty.

“I will call Michael Ballack and insist on a meeting in Germany,” Löw told the German Football Federation (DFB) website on Wednesday afternoon. “I am extremely disappointed by the manner and content of what he has said – I can not accept this. What happens after that, and the decision I make, will depend on this conversation.”

Löw pointed out that in the past Ballack as team captain had been asked to address things he saw differently than the coaching staff. “The fact that he chose to air these criticisms of our work in the media is utterly wrong and incomprehensible,” Löw said. “No player – and the captain isn’t an exception – has the right to criticise the selection policy or decisions of the coach, or to level public criticism against the team.”

Earlier in the day, Löw and team manager Oliver Bierhoff held an emergency phone conference call with DFB president Theo Zwanziger, who is in Zurich for a FIFA conference, to discuss the matter.

“I am disappointed with Michael Ballack over his style,” said Zwanziger. “His comments have led to a complicated and difficult situation developing. The team has developed in a very positive way in the last few years and therefore I don’t understand the fact there has been criticism from the team aimed at Joachim Löw in the media.”

Zwanziger said Ballack’s comments about his coach were inappropriate. “In the interest of the success of the team, the authority of the national team coach must have the highest priority,” he said.

“Maybe he is not in top form right now, but he is still playing at very high level,” Ballack said of Frings. “If he is no longer wanted, he should be told so honestly. Respect and loyalty is the least you can expect as a deserving national team player.”

And the Chelsea star said he had sympathy for Kevin Kuranyi who walked out on the team during their 2-1 win over Russia on October 11, after not being selected for the game, while Löw has said he will never select Kuranyi again.

Having captained Germany to World Cup qualifiers over Russia and Wales earlier this month, Ballack had an operation to remove thickened nerves from both feet. Löw never called him after the operation, Ballack said.

“I am surprised, because in the past it was always different,” Ballack said.

But former Germany captain and coach Franz Beckenbauer said he is troubled by the noises coming from die Mannschaft and players’ egos are getting the better of them. “For me there is too much talk coming from the national team,” said Beckenbauer.

“Everyone is announcing themselves whether it is Kuranyi, who suddenly disappears, or Frings, who talks about retiring. And now we have Ballack, the captain, coming out and saying this. These sort of things should be dealt with internally. Some people should hold their tongue and play football, or at least have the conversation with the coach, not with a journalist.”

Ballack has already tested Löw’s patience this year when he had an on-field row with Bierhoff after the Euro 2008 final last June in Vienna which erupted again in September with a war of words between the manager and captain in the media here.