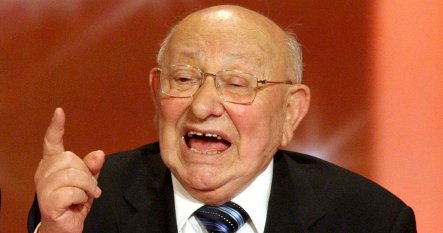 The feisty 88-year-old “literature pope” refused to accept a German Television Prize for his life’s work on his high-brow show, “The Literary Quartet,” during the award ceremony two weeks ago, calling the award show and the state of German TV rubbish.

This week Deutsche Telekom addressed the ruckus with an advertisement for its T-Home internet and television service featuring Reich-Ranicki sternly wagging his finger at the award show audience with the text, “With us, everyone finds a TV programme they like.”

It was initially reported to have been created with Reich-Ranicki’s permission, but he said Tuesday that he’d mistakenly agreed let Deutsche Telekom use his image.

“I didn’t realize what they meant, they were a bit vague,” he told German broadcaster Bayern 3. “This was a one-time case of a misunderstanding.”

Meanwhile budget airline Ryanair ran an ad with a similar image in several newspapers with the phrase “I’ll accept this price,” in a play on the German word for prize printed below. But the paper reported that the company did not ask permission to use the photo.

“We believe that Mr. Reich-Ranicki is a person with humour,” Ryanair spokeswoman Anja Seugling told Express, adding that the company found it “especially appealing” to put these words in the mouth of a literature critic, of all people.

“It’s all nonsense,” Reich-Ranicki said on Monday, the paper reported. “I’m not worried about it,” he said, adding: “I’ll take care of it.”

The public face of literary criticism and debate in Germany initially refused to take the prize in his hands, but later agreed to take it home.