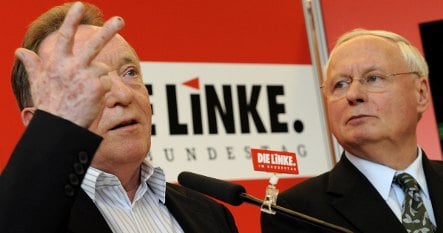 Sodann, an actor who once played TV cop, created a storm of controversy last week after saying if he were a real police commissioner he would arrest Ackermann.

The 72-year-old actor, who in May of next year will run against current President Horst Köhler and Social Democratic candidate Gesine Schwan, was also sharply criticized for saying Germany was not a democracy.

But instead of chastising Sodann, Lafontaine called for taking bankers and other executives more accountable for their actions. “Unfortunately our regulations for manager accountability are too modest, and those that we have have never once been implemented,” Lafontaine told the Stuttgarter Zeitung on Monday. “If we had fair laws, some would now have to be put under lock and key.”

Lafontaine said that he found it “refreshing when a former ‘Tatort’ commissioner is so upset by seeing money gambled away that he judges it to be a criminal offence” and that he “would not only consider Mr. Ackermann to have taken part in this gambling, but also many others as well.”

In an interview with Bild am Sonntag, Ackermann said he was incensed at the suggestion that he was somehow a criminal. “I find it outrageous that someone running for the highest office in a constitutional state would say such a thing,” Ackermann said. “I am beginning to fear for this country.”

Demonstrators against restrictions imposed by Chancellor Angela Merkel's government to halt coronavirus transmission had attempted in the summer to enter the Reichstag parliament building, but were repelled by police forces.

Lawmakers of the far-right AfD party, some of whom had marched in increasingly aggressive virus-skeptic demonstrations, have also been accused of inviting into the parliament building protesters who went on to harass other MPs.

Following chaotic scenes overnight in the Capitol, German parliament speaker Wolfgang Schaeuble said he would examine “what conclusions should be drawn from this for the protection of the Bundestag”, his office said in a statement.

The Bundestag refers to the lower house of parliament with its 709 lawmakers, while the Reichstag is the building where they do their work.

The German embassy in Washington has been requested to provide a report on how the “violent excesses could have happened in the Capitol”.

Security forces of the parliamentary groups, the state of Berlin as well as the federal interior ministry have been tasked with examining whether protection of the Bundestag would need to be beefed up.

Leaders of the AfD released a statement Thursday denying any links to heated virus-skeptic protests in front of the Reichstag building last year.

“Anyone who equates the unrest in Washington with the demonstrations that took place before the Reichstag building in Berlin, and who points to our party's sympathy for these events, is abusing the anarchist events for political purposes in Germany,” they said in a statement.

The mainstream political parties have said the AfD shares blame for the security breaches at the Reichstag and demanded that it call on its supporters to respect Germany's democratic institutions.