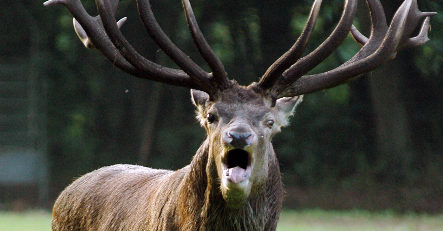 “With the deer in heat, this was an especially dangerous situation,” police spokesman Wolfgang Brunke told The Local on Monday. “The girl should have under no circumstances tried to feed the animals or left the trail – it’s forbidden at the park.”

The enraged buck apparently hit the girl from behind with his antlers as she approached the doe with a bag of animal feed. When she tried to right herself after the blow, the randy stag charged again, injurying her on the head. Authorities first thought the girl had been seriously injured, but discovered the injuries were superficial after she was transported to the hospital, Brunke said.

The 100-hectare Wild and Wanderpark Südliche Weinstrasse, with more than 400 different animals of 15 different species including buffalo, boars and ponies, has not had such an accident for about 10 years, Brunke told The Local.

“That was when a young boy had his finger bitten by a wolf,” he said. “He disobeyed the rules too, though, trying to stick his fingers through the cage to feed it. Now you can’t get anywhere near the wolf cages.”