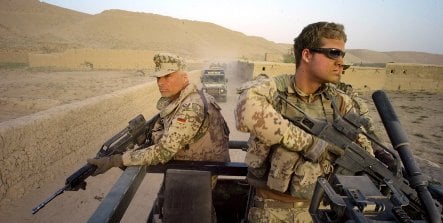 An archive photo of German soldiers on patrol near Kunduz. Photo: DPA

“The blast took place on a main road. This is the work of terrorists. We have arrested two suspects in relation to the incident,” he said.

Omar told news agency DPA two other Bundeswehr soldiers were injured in the attack in the Char Dara district not far from Kunduz. But the International Security Assistance Force (ISAF) said in a statement only one other soldier and a civilian were wounded.

Two children also suffered injuries as a man blew himself up after approaching the German soldiers on a bicycle, according to Omar.

The German Defence Ministry confirmed there had been an incident on Monday, but declined to confirmed their were casualties.

German soldiers are part of the NATO mission in Afghanistan and are the lead force in the relatively calmer northern part of the country. One German soldier died in the Char Dara district in August after his patrol ran into an explosive trap.