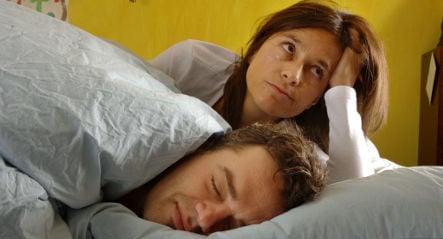 With both snoring and erectile dysfunction, the same regulatory functions are at work in the veins, Konermann said. The same blood flow mechanism that creates an erection also ensures that the airway remains clear during sleep. “When that doesn’t function, people snore and the blood flow to the penis or labia doesn’t occur.”

Every healthy man has erections in his sleep, which sometimes last up to an hour. It is simply the body’s way of regularly testing circulation “the way cars need a regular brake test,” Konermann said. The female body functions similarly, though it isn’t as well known.

Some 16 percent of men suffer from erectile dysfunction, and now doctors know that if they can still achieve an erection in their sleep, the problem is psychological and not physical. In these cases, Konermann said that medication like Viagra has been an effective treatment.

There is also a treatment for snorers, who besides erectile dysfunction are at risk for long-term heart problems and suffer from fatigue because of the sleep disturbance. Patients can wear a mask that provides pressurized oxygen. “It’s not comfortable, but it’s helpful,” Konermann said. “Besides, it’s also a natural healing method – it’s just air.”