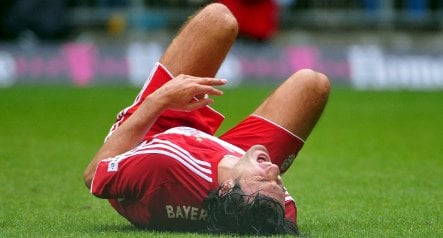 The 31-year-old bruised his ribs in the first-half of Saturday’s 1-0 win at Karlsruhe – the defending Bundesliga champions first win in four league games – and sat out training on Sunday.

“We are monitoring him on a day-to-day basis and we are hoping, of course, he will be fit to face his old club,” said Klinsmann.

Should Toni fail to be fit in time for Tuesday’s match, Germany striker Lukas Podolski is likely to deputise. But Klinsmann has no such worries about French midfielder Franck Ribery and striker Miroslav Klose who both came off in the second-half against Karlsruhe – Klose for a minor knock and Ribery to be rested for the Fiorentina game.

A 1-0 win at Steaua Bucharest and a 0-0 draw at home to Lyon so far puts Bayern top of Group F with four points ahead of Fiorentina and Lyon on two and Bucharest lagging behind on one.

A win on Tuesday night at Munich’s Allianz Arena would leave Bayern on the verge of the first knock-out round and Klinsmann is desperate for his struggling side to ignore their poor Bundesliga form.

“This game gives us a giant chance of advancing to the next round of the competition,” said Klinsmann. “We look forward enormously to the task against

Fiorentina, but it will be a very difficult game.”

Bayern were unimpressive against Karlsruhe on Saturday and remain 11th in the league having slumped recently to shock defeats by Werder Bremen and Hannover, plus a 3-3 draw at home to minnows Bochum in their previous games.

In contrast, Fiorentina cruised past 10-man Reggina 3-0 on Saturday to move level on points with the top three ahead of Sunday’s matches in Serie A.

It was La Viola’s third straight victory and proved they have overcome their early season troubles when they lost their first two away matches as they move up to fifth in Serie A.

A penalty from Giampaolo Pazzini and an Alberto Gilardino brace secured the three points that sees Fiorentina join leaders Lazio, Udinese and champions Inter Milan on 13 points at the top of the table.

With six goals to his credit, Azzuri striker Gilardino will be a threat to Bayern’s leaky defence, while Munich’s Germany forward Klose is struggling for confidence despite hitting the winner against Karlsruhe.