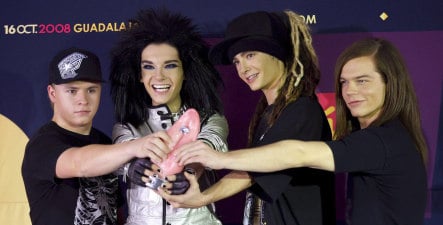 Lead singer Bill Kaulitz and his hair accepted the award – shaped like a large pierced toungue – for their song “Monsoon” in the Mexican city Guadalajara on Thursday evening.

The Magdeburg-based teen group – Bill, his brother Tom, Georg and Gustav – were also honored as Best International Newcomers, in addition to receiving a prize for their Venezuelan fan club and the distinction of best mobile phone ring tone for “Monsoon.”

Awards were decided based on some 12.5 million votes cast online, and MTV estimated that some 560 million viewers watched the show worldwide.

They released their first album “Schrei” (Scream) in May 2006 and sold some 600,000 copies in six days in Germany. It also quickly became a major success in France, Austria and Switzerland.

The band’s first US single was released in late 2007. The band began touring the country in August after then 18-year-old singer Bill Kaulitz recovered from surgery to his vocal chords in late March.

Tokio Hotel has also been nominated for the best live band for the November MTV Europe Awards in Liverpool, England.