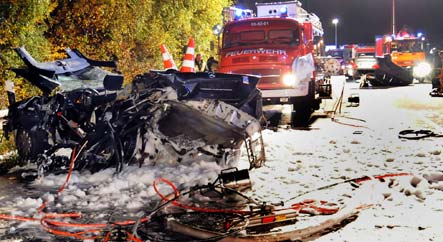 Four others – two men and two women – were injured in a horrible five-car pileup just after midnight, according to police in Münster. The first fatality occurred after a driver slammed into another car and flipped his own vehicle. As he attempted to free himself from the wreckage he was hit by two other cars and died.

Another man died after he rammed the stopped autos, causing his car to overturn multiple times.

Police said wreckage was strewn over hundreds of metres and the autobahn heading towards Wuppertal had to be closed for several hours for rescue workers.