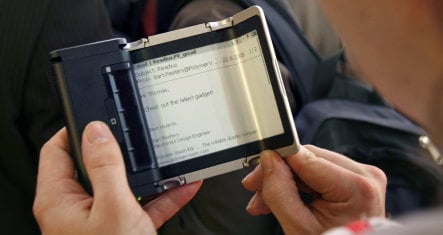 According to organisers of the fair, which opened to sector professionals on Wednesday before welcoming the public this weekend, electronic book sales should surpass those of classic models by 2018. But visitors are eager to handle the Kindle model sold by online book giant Amazon, a rival model by Sony of Japan, or the quirky Readus offered by Polymer Vision with a screen that rolls like ancient parchments.

All hope the format will benefit from an “iPod effect” that boosted sales of MP3-format music players when the US firm Apple launched what was to become one of its latest icons. Electronic books hold great promise, with the ability to download just about anywhere and at anytime via wireless connections an entire book from catalogues that currently comprise 185,000 titles in the United States. The machines themselves are no bigger than paperbacks, and reading them has become easier on the eyes with the development of a display system called “digital ink.”

But the industry also sees pitfalls, in particular the potential for piracy. That said, “if bookstores do not take up the digital trend, they will have to close shop,” forecast Fran Dubruille of the international federation of book sellers. Allan Adler of the Association of American Publishers, worried however that the sector could fall victim to pirates that already plague the music and film industries. “What happens when books go online without permission from the publisher,” he asked.

On the other hand, Brazilian author Paulo Coelho, a self-proclaimed “popstar” with bestsellers like The Alchemist, sees only advantages in digital publishing. “Instead of seeing new marketing opportunities in new media, publishers view the Internet as an enemy,” said Coelho, who added that he has freely put his books online because it increases sales. “The more you give, the more you receive,” said the author who has sold more than 100 million books worldwide.

Many sector professionals note that while the digital revolution has been heralded often, it has only really gotten off the ground in the United States and perhaps in China. A major obstacle is language, with the vast majority of digital books written in English. Creating digital libraries can also face political opposition as the online research giant Google discovered when some countries objected to classic works being included in the US group’s innovative project. A technical hurdle is the format, since it might be hard for a publisher to make a work available for a wide range of “books” by different manufacturers.

Finally, the price could dampen enthusiasm for a few more years as well. “Electronic books are expensive,” Dubruille acknowledged. Prices average around €300 ($400), on top of which buyers must add the cost of downloading, which can be as much as a hard copy.