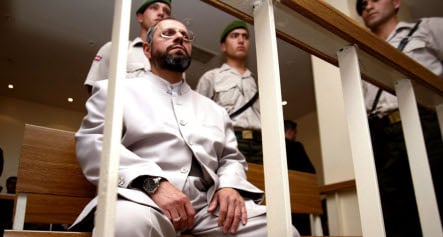 Metin Kaplan, 56, was first sentenced to life imprisonment in June 2005, but the appeals court overturned the ruling five months later on the grounds of procedural deficiencies and inadequate investigation.

At the end of a retrial that took into consideration the appeals ruling, a court in Istanbul handed a fresh life sentence to Kaplan on charges of “plotting to overthrow Turkey’s constitutional system through the use of arms,” the Anatolia news agency reported on Wednesday.

Kaplan – leader of the Union of Islamic Communities, also known as Hilafet Devleti, or Caliphate State in Turkish, was put on trial here after being expelled from Germany on charges linked to his role as the leader of a group which aspires to set up a state in Turkey based on Islamic law.

Among the charges levelled against him was an alleged 1998 bid to use an explosives-laden plane to blow up the mausoleum in Ankara of Mustafa Kemal Ataturk, the founder of modern secularist Turkey.

Kaplan moved to Germany in 1983, where he was granted political asylum in 1992. He took over the leadership of Hilafet Devleti after the death in 1995 of his father, Cemaleddin Kaplan, a preacher known in Turkey as “The Voice of Darkness” for his ultra-radical Islamist views.

In Germany, Metin Kaplan and his family lived on welfare payments despite official estimates that his organisation had earned millions of dollars from donations and property deals.

He was jailed in Germany for four years from 1999 to 2003 for having ordered the killing of a rival during the struggle for his father’s succession as leader of the organisation.

The religious group, which launched hate campaigns against Israel and Turkey, was banned in Germany in 2001 under legislation passed in the wake of the September 11 attacks in the United States to crack down on Islamist extremists.