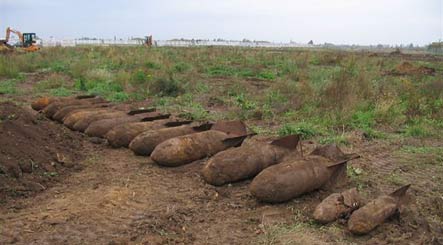 A few of the 2,100 bombs found on Wednesday in Köthen. Photo: DPA

The find is the biggest in Germany this year, the state’s military ordnance disposal service said. The German bombs, ranging is size from one to 250 kilogrammes, appear to have been buried on the edge of an airfield at the end of the Second World War along with several pipes to launch rocket propelled grenade and bits of artillery.

The ordnance disposal team was able to transport the bombs to their facilities where the larger pieces will be detonated on Wednesday afternoon.

Another major ordnance find cropped up on the Baltic Sea coast last month when municipal workers spotted a four-metre long (12-foot) piece of a World War II era torpedo near the Timmendorf beach.