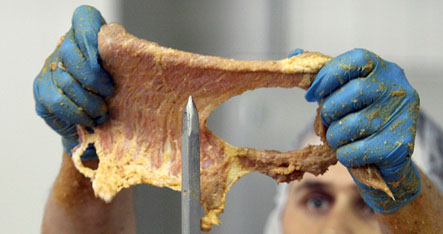 All of the company’s meat was confiscated for review, though it is not yet clear whether there are widespread health risks to the public.

Inspectors were already on the scene on Saturday after the slaughter house was recently denied a building permit for expansion because of complaints by neighbours.

The case is one of several that have shocked meat-loving Germans in recent years.

Last fall, a Bavarian producer admitted to shipping beef and turkey meat unsuitable for human consumption to kebab restaurants around the country.

Döner kebabs are sold in thousands of German stands from large meat skewers that roast slowly in their windows. From corner stands to packing plants, kebab makers around the country felt the pinch when the “Döner King” case broke in Berlin in fall 2006.