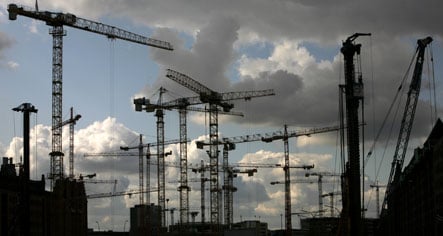 The German think tanks expect Europe’s largest economy to grow by 1.8 percent this year, but only a meagre 0.2 percent 2009 – down considerably from their earlier forecast of 1.4 percent.

The institutes cited the global financial crisis, collapsing real estate bubble and inflationary pressures as the biggest dangers to the German economy – which is heavily dependent on exports.

“The risk that aforementioned conditions could worsen has increased in recent weeks,” the institutes wrote in their highly anticipated economic outlook.

The think tanks said the dark clouds over the economy would also likely have an impact on the German labour market, which has proven resilient throughout 2008. Although the unemployment rate is expected to remain steady at 7.5 percent, the economy will no longer create new jobs.

“At the end of the year some 350,000 people will be out work compared to the first part of the year,” the institutes wrote.

Four leading German institutes – Munich’s Ifo, RWI in Essen, IfW in Kiel and Halle’s IWH – release joint economic forecasts twice yearly together with the WIFO and IHS in Austria and KOF in Switzerland.

The forecast of gross domestic product growing by 0.2 percent in 2009 is considered the institute’s most likely outcome. But given the exceptionally high uncertainty stemming from the international financial crisis, they also drew up a more pessimistic scenario, according to which the German economy could actually contract by as much as 0.8 percent next year.

The last time Germany was in recession was in 2002-2003. But the so-called “risk” scenario was based on the assumption of a worldwide recession in 2009 where global trade would expand by a meagre one percent, financing conditions would deteriorate sharply for companies and private households and uncertainty among consumers would increase, the institutes said.

A separate barometer of financial sector confidence, compiled each month by the ZEW institute in Mannheim, showed on Tuesday just what a battering sentiment is currently taking.

The ZEW index plunged 21.9 points to minus 63.0 points in October, the second lowest level since the start of the survey in December 1991. “Because of the financial market crisis, the perspectives for the economic development in Germany have significantly deteriorated,” ZEW wrote.

Beyond the financial sector, key German exports were also likely to be “particularly hit by the crisis,” it said. In addition, households might reduce already tepid consumption because of tension on financial markets and extreme uncertainty in general, ZEW said.

Analysts said the drop in the ZEW index came as no surprise. “The deterioration itself does not come as a surprise, given the massive negative news flow in recent weeks which is reflected in the bulk of the October ZEW ballots,” said UBS economist Martin Lueck.

Around 85 percent of the questionnaires had been returned by the end of last week, meaning that only a small fraction of this month’s survey results included the information on the various government bail-out plans drafted over the weekend, Lueck said.

The Economy Ministry is to unveil its latest growth forecast later this week. On Monday, Economy Minister Michael Glos said the “real economy,” as opposed to the financial economy, had not be badly hurt so far and that a feared credit crunch had not materialised.

But the German economy, which relies heavily on exports, is likely to suffer from economic slowdowns in countries like the United States or Spain, for example.