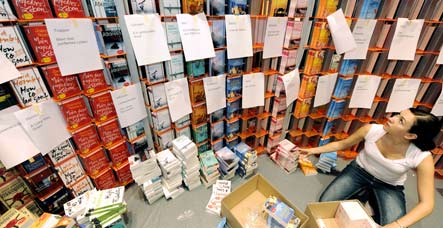 Preparations for the book fair starting on Tuesday. Photo: DPA

The malaise has reached the doorstep of the literary world as well: Business is down three percent over the first nine months of this year, according to a recent survey of 90 German publishers. The jitters are evident in other numbers. The 7,000 exhibitors from 101 countries expected at the fair suggest stagnation compared to last year’s turnout.

Still, industry players remain stubbornly optimistic, banking on the potential of electronic books and arguing their market operates under separate conditions, according to trade magazine Buchreport.

The Frankfurt book fair is showcasing Turkey this year, an aspiring EU candidate that has special significance in Germany, home to 2.4 million Turks. Nobel laureate Orhan Pamuk counts among some 300 Turkish authors – out of 1,000 writers in total – invited for the four-day event. Both Pamuk and Turkey’s President Abdullah Gul are expected at the fair’s official opening, Tuesday night.

Author of the acclaimed novel “Snow,” translated in some 40 countries, Pamuk remains a highly divisive figure in Turkey who faced charges for his controversial remarks about the World War I massacre of Armenians. Other celebrity authors include German novelist Günter Grass and Brazil’s Paulo Coehlo, who celebrates some 100 million copies of his books sold worldwide.

Coelho is to receive a Guinness award for the world’s most translated novel – “The Alchemist,” which has been published in 67 languages. Besides Turkey, China – the special guest of next year’s Frankfurt fair – will also play a prominent role here this week, with representatives from 108 Chinese publishing houses attending.

Meanwhile, Germany’s satyric monthly Titanic may stir up some controversy by hosting a Prophet Mohammed look-alike competition during the fair which has already stirred up anger at home and abroad, according to reports. The publication has invited Turkey’s Gul – a devout Muslim – to take part, claiming the event will “be a blast,” Spiegel Online reported.

In a sign of changing times, traditional books will account for only 42 percent of the fair’s offerings, with the rest split among audio and video, cartoons, educational software and other items. Indeed, this year’s stars are electronic books, allowing readers to download whole novels from the internet that they can read on pocket-book-size portable screens. Widespread in the United States and Japan, e-books have yet to make their mark in Europe.

The Frankfurt fair is the occasion for big-time manufacturers like Amazon and Sony to strut their wares in e-book related areas like stockage capacity or reading comfort.