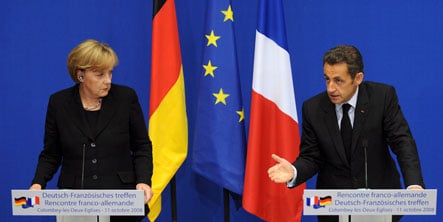 The leaders of the 15 eurozone economies and Britain’s Prime Minister Gordon Brown were due in Paris on Sunday for talks and the continent appeared to be leaning towards a British-style plan of partial bank nationalisation.

Ahead of Sunday’s summit, Sarkozy met Merkel in Colombey-les-Deux-Eglises, home village and final resting place of General Charles de Gaulle, in a bid to coordinate the positions of the eurozone’s two largest economies.

“All decisions, all preparations and all analyses, we’re making together,” Sarkozy insisted, denying reports that he had ever proposed setting up a joint European bank bail-out fund, an idea rejected by Merkel’s Germany.

“We are analysing the crisis together. Germany and France have perfectly identical views on the consequences to take from that for the short, medium and long term,” the French leader said.

Merkel agreed Paris and Berlin were “on the same path as regards putting in place a concerted and coherent reaction for the eurozone” but noted that within this there was “naturally room for manoeuvre for each member state.”

The pair said they expected to make more concrete announcements about economic measures to contain the effects of the credit crunch and the week’s stock market freefall on Sunday after the summit.

As the European leaders met in France, the finance ministers of the world’s Group of Seven industrial powers were in the United States to discuss a global response. After G7 talks in Washington on Friday , US Treasury Secretary Henry Paulson said his government was ready to invest directly in banks for the first time since the Great Depression in a bid to restore confidence.

This move followed the decision by Britain’s Brown to guarantee inter-bank lending and to offer to take stakes in some of the country’s biggest banks in a programme of partial nationalisation.

Europe now seems likely to follow London down this route, which bankers hope will restore confidence and restart the frozen inter-bank lending market. France’s finance minister, Christine Lagarde, said French banks were relatively well positioned and would probably not need the government to buy their stocks, but other European economies might follow the British example.

“It’s very likely, because European banks are also under-capitalised,” she said in an interview with France Info radio on Saturday. “We have seen Great Britain, which is outside the eurozone, make propositions in this area. We’ll have to see about that in the eurozone, but I suppose it’s one of the options.”

On Friday, the German daily Die Welt reported that Germany was working on a British-style plan, and a senior European offical told AFP that Brown’s idea was a “good one” and would be discussed by the eurozone 15.

“It would be smart to follow the British example at the European level,” he said, speaking on condition of anonymity so as not to pre-empt the summit. “I spoke to Madame Merkel and I think she’s open to a European decision.”

Under the British programme, unveiled on Wednesday, £50 billion (€64 billion) of taxpayers’ money has been made available to buy shares in the country’s banks.

Britain is not a member of the eurozone, but Sarkozy sid he would meet Brown separately at the Elysee Palace just two hours before the main summit in order to “maximise the chances” of full European cooperation.

Before their talks Merkel and Sarkozy inaugurated a memorial to De Gaulle in Colombey-les-deux-Eglises, the village east of Paris that hosted the famous summit between the general and Chancellor Konrad Adenauer 50 years earlier.

On Sunday, Merkel and Sarkozy and their 13 colleagues from the other members of the single-currency bloc will hold a crisis summit in Paris. Some of the eurozone leaders were annoyed at being locked out of last week’s talks, and Spain’s Prime Minister Jose Luis Rodriguez Zapatero had called for a full meeting of members on Friday when he visited Sarkozy.