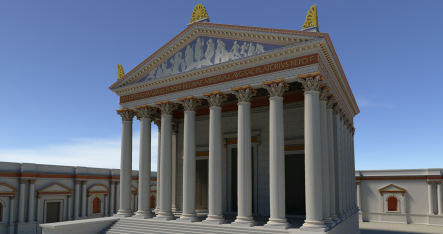 The city’s name may have taken on the meaning for stinky fragrances, but its original name, “Colonia,” is based on the same Latin root for the word “colony.”

Cologne, which lies on the Rhine River, is one of the oldest cities in Germany after being founded by the Romans in the year 38 BC.

The likeness of the Roman town can now be viewed online after a collaboration between the Cologne University of Applied Sciences, the city’s Romano-Germanic Museum, and the University of Cologne.

The three institutions presented the finished product on Friday, saying the grandeur and scale of Colonia were unusual for a Roman outpost.

Clear geometric lines and gracious proportions characterized the city’s design and Colonia has city walls, a capitol temple and a forum as highlights of the 3-D tour.