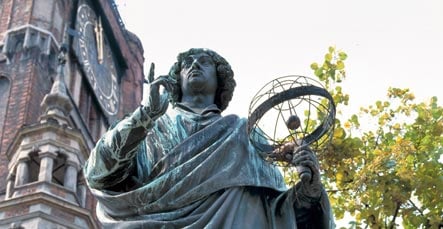 A statue of Copernicus in Torun. Photo: DPA

The commission has officially changed the name of the EU’s GMES (Global Monitoring for Environment and Security) programme to “Kopernikus,” the German spelling of Copernicus, at at the initiative of commission Vice President Günter Verheugen, a German. The Polish spelling is “Kopernik.”

“We are very pleased the program is named after a Polish astronomer. But the German spelling obscures his Polish nationality,” Janusz Ziolkowski, vice president of the space and satellite studies department of the Polish Academy of Science (PAN), told AFP.

In Poland, Copernicus is revered as one of the greatest Poles in history. But Germans consider him one of their own. International encyclopedias tend to identify Copernicus as a Pole.

His native Torun (Thorn in German), now a Polish city, was under Polish and Prussian governance at various point in history. At the time of his birth in 1473, Torun had been under Polish rule for 19 years.

“We are not insisting that the EU programme necessarily use the Polish spelling, Mikolaj Kopernik. This would make the astronomer less universal. We would like to see the Latin spelling – Copernicus – used, like in the case of the Galileo project,” Ziolkowski said.

In a letter to the European Commission, Bielan alleged that “by using the German spelling, Verheugen falsifies history and betrays either a lack of awareness or bad intentions.”

“Is this an attempt at historical revisionism or a linguistic error?” asked the politician from the Law and Justice (PiS) party, known for anti-German rhetoric.