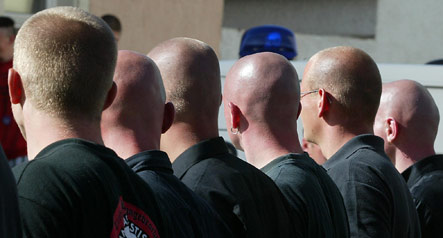 Operations began at 6 am based on “positive information that the HDJ is engaging in unconstitutional activities,” the Ministry said, adding that it is a “neo-Nazi aligned youth organization.”

Recreational HDJ activities, such as camping outings that appear to be non-political are actually meant to initiate “children and adolescents at their young age to national socialist ideas in order to bring them to right-wing extremism later in life,” according to the Ministry.

The searches should clarify whether the HDJ is aggressively violating the constitution, Deputy Interior Minister August Hanning said.

The HDJ sprang out of the Bund Heimattreuer Jugend, an organization formed in the 1950s in Plön in the German state of Schleswig-Holstein. They describe themselves as an “active youth movement true to the people and the nation, for all German boys and girls between the ages of 7 and 25.”