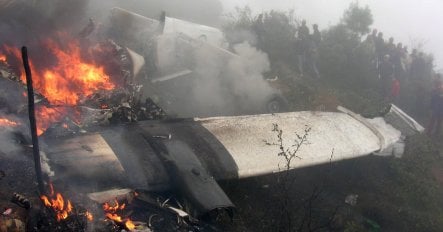 “When the flight left Kathmandu they had five kilometres of visibility at Lukla but by the time they arrived after 40 minutes of flying, visibility suddenly worsened,” Mohan Adhikari, a senior airport official, told AFP. “Two planes had already landed that morning so the pilot (of the plane that crashed) must have thought he could too.”

The airport is the gateway to Nepal’s Everest region and is used by thousands of trekkers and mountaineers each year to access the stunning Himalayan range that forms Nepal’s northern border with Chinese-controlled Tibet. Weather at the airport in Lukla, 140 kilometres (90 miles) northeast of Kathmandu, changes frequently and swiftly.

Pilots are supposed to have five kilometres (three miles) of visibility to land at the 550 metre-long (1,815 foot) sloping airstrip perched on a hillside 2,757 metres above sea level, Adhikari said.

The plane slammed into the hillside and burst into flames around 50 metres short of the runway at the small Tenzing-Hillary Airport, named after Everest pioneers Sir Edmund Hillary and Tenzing Norgay.

“When the aeroplane was on its final approach, suddenly fog and heavy mist came up from the valley below. The plane descended and disappeared inside the thick mist and very shortly afterward we heard a big bang,” said Suraj Kunwar, a journalist for Nepal media group Kantipur who witnessed the crash.

The victims’ bodies were transported to the capital on an army helicopter Thursday and were in a hospital morgue awaiting identification, officials said. A forensic team from Germany was on its way to assist in the identification of the 12 German tourists killed, Modraj Dottel, Nepal’s Home Ministry spokesman told AFP.

“We have accepted a request from the German embassy to bring in a team of five people to help identify the bodies,” the official said, adding he did not know when they were expected.

The pilot, who was the lone survivor, was recovering from his injuries and would be interviewed as part of a probe by Nepal’s government, Adhikari said. Tourism is a major foreign currency earner for impoverished Nepal and since the end of a civil war in 2006 between the country’s Maoists and the government, the number of visitors have increased.

This year around 500,000 tourists are expected, the most since 1999, with many coming to trek in the Himalayan mountains.