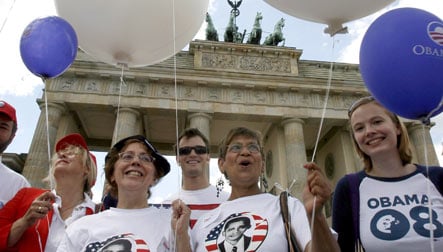 Following the second of three presidential debates on Tuesday night, Democratic Sen. Barack Obama and Republican Sen. John McCain are gearing up for a final mad dash of what has been an excruciatingly long campaign.

While the race for the White House will likely be won or lost in a few key battleground states, some young Germans have decided they don’t want to remain idle spectators in an election that has global implications.

To that end, the JungSozis, a pragmatic offshoot of the more leftwing youth group of Germany’s Social Democratic Party (SPD), the JuSos, has forged ties with young US Democrats in the German capital.

Together with the Young Dems Berlin – which is associated with Democrats Abroad – the JungSozis organized their first joint event last week at a café near Humboldt University. The politically active youngsters invited Stan Otto, a political expert at the US Embassy in Berlin, to describe the American election process and field questions from the audience.

“Our positions have more in common with the American Democratic Party than with traditional JuSos, who tend to be anti-capitalist, and would never have considered organizing something like this,” said JungSozis member Florian Szamocki.

A law student, Szamocki said he had been interested in US politics since high school, when he traveled to Oklahoma on a US Congress-Bundestag exchange program. The JungSozis have also been quietly working on the sidelines to assist the Young Dems in recruiting American voters in Berlin. But the group has to walk the fine line between helping out likeminded Americans and being perceived as a foreign influence on another country’s politics.

“The Dems Abroad have a regulation not to interfere with German politics, so we can’t officially campaign for Obama with them or register voters,” said Szamocki. “But as much as it merely touches the German side we will be there. There’s approximately 20,000 Americans living in Berlin, and there’s a lot we can do for them.”

Alexander Zimmerman, chairman and treasurer of Young Dems Berlin, said the JungSozis have been instrumental in increasing the group’s manpower for voter registration efforts by passing out flyers and directing Americans towards Young Dems volunteers at Obama’s speech in Berlin in July and at the US Embassy’s Independence Day party.

But he also stressed developing ties between the two organizations was important to transatlantic ties on a grassroots level: “It gives us a new lens on our own politics.”

That sentiment was seconded by Otto, the US Embassy official, who also said he had never witnessed anything like the partnership between the JungSozis and the Young Dems. “It seems like they know each other well,” he said, praising it as “an excellent thing – working together like this is the glue of international relations.”