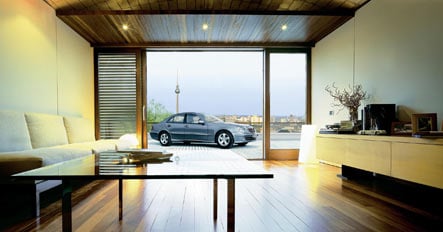 On Sunday, another BMW topped off the growing list of car casualties, so perhaps it’s not surprising that buyers are snapping up innovative new apartments in the area that allow owners to take their cars safely to bed with them, almost literally.

These apartments, or “CarLofts,” are modular units that feature a car elevator, letting residents park directly adjacent to their loft in a garage. The “Carloggia,” as developers are calling it, enables drivers to avoid street parking, dark parking garages and the inconvenience of schlepping groceries long distances.

“People buying the CarLoft are considering security, convenience and luxury,” developer Johannes Kauka told The Local on Tuesday. “But mainly these are people who have a real affinity for automobiles.”

The patented luxury flats on the trendy Paul-Linke-Ufer river bank area of Kreuzberg cost from €486,000 to €1.6 million, and are set for completion at the end of the year, Kauka said. The five-story “Carlift,” which can be digitally programmed for busy times like the morning rush, carries up to 4.9 tonnes of luxury car mass – enough for gas-guzzling Hummers and even freight vehicles.

The idea was born five years ago when Kauka was looking to build luxury apartments, but had neither the space nor the proper ground consistency for a parking lot or underground garage at the Berlin river front property. “We just decided to take the cars up with us,” he said.

Seven of the eleven units, which are as large as 540 square metres (including the garage and garden space) have already been sold, and there are plans to expand the idea to cities across the world. Well-heeled Germans in Hamburg, Munich, Düsseldorf, and Frankfurt could soon own a CarLoft. But plans to build similar buildings in the cities of St. Petersburg, Tel Aviv and Cape Town will likely have even more resonance with those seeking secure living quarters.

“There are no disadvantages to a living space like this,” Kauka told The Local from a busy Munich real estate trade show. “You have all the benefits of a single family home in the heart of the city, it’s safe and simply more comfortable.”

But in a district where many people consciously choose an alternative lifestyle, opting to bike or take public transportation instead of gliding to work in a BMW, the new development could turn a few anarchist heads. But Kauka dismisses the idea there will be widespread opposition to his project.

“Sure, these people who burn cars have gained some attention, but they are a Berlin anomaly and don’t represent real Germans,” he said.