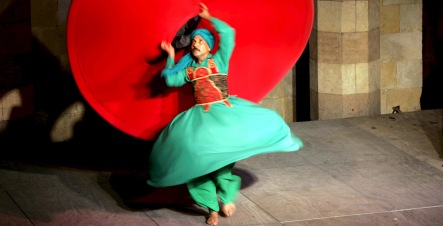 Check out the whirling dervish workshop in Munich. Photo: DPA

Be fabulous darling, and join in on the fun this weekend when the city’s most outrageous drag queens converge for the transgender party of the year. The four day event includes film screenings, discussions, dance parties and live entertainment.

Cult of the Artist: Celebrities. Andy Warhol and the Stars.

Iconic images of Mao and Marilyn hang beside self-portraits of the artist himself in this new exhibition at Hamburger Bahnhof, the latest installment of the museum’s “Cult of the Artist” series, which deconstructs the myth of the artist.

Last chance to get acquainted with one of Germany’s most celebrated scientists. An exhibition at Berlin’s Museum for Technology, which celebrates the 150th anniversary of Max Planck’s birth, ends Sunday. Explore breakthroughs he made in the early 20th century including his pioneering theory on quantum physics.

The year’s best TV movies and series from around the world are screened along with some classics at this festival. Lectures delve into the exciting topic of television’s move into new platforms like the internet and mobile phones. Get in on the action.

Over twenty years after forming, Evan Dando and his band are touring Europe. Friday night’s stop in Cologne is the first of eight German dates. Go and see if they still have that special something that had you so charmed in the early nineties.

The Jam’s former frontman has astounding longevity. Check out tunes from his new disc 22 Dreams Monday night when he hits up Cologne’s E-Werk.

Guitar extraordinaire Bill Frisell and his quartet grace the stage at the Leipzig Opera House Friday night as part of the 32nd Leipzig Jazz Festival. If you do one thing this week, see this concert.

Dreamwomen. Beauty in the 21st century.

Got an interest in the relationship between fashion photography and beauty? Check out this exhibition in Hamburg and explore the ways in which the model inspires the artist, and vice versa. Or, just go to see pictures of beautiful women smoking and lounging around on leopard print blankets.

Matisse had a way with faces, rendering them in such a way that in the end, they often appeared as a mask. Observe over one hundred works, including “Lady in Green” and “Spanish Woman with Tambourine,” at this rare exhibition of Matisse portraits.

One of the most moving singer/songwriters ever is on the road in Europe. Monday, he stops off in Munich, so if you’ve got the means, get yourself a ticket, and get ready for an evening of extraordinarily poignant “songs of love and hate.”

It’s a lot more than simply spinning, but you’ll probably want to have a good grip on your equilibrium before embarking on this three-day workshop taught by a Turkish master. Classes, presented in English, are based on the teachings of the 13th century poet Rumi.