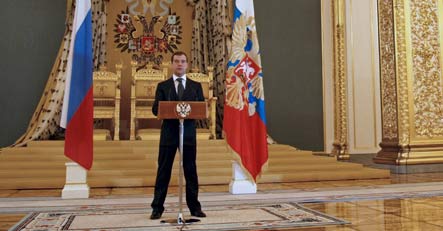 Chancellor Angela Merkel and several top ministers will travel to Saint Petersburg to meet with President Dmitry Medvedev and members of his cabinet for the 10th in a series of annual inter-governmental meetings. The gathering, however, will be on a smaller scale than usual, not including the entire governments and lasting only one day instead of two. Germany is widely considered Russia’s closest ally in western Europe and is its biggest trade partner.

But ties frayed when Russian troops rolled into Georgia in August after Tbilisi tried to reclaim control of the Moscow-backed rebel province South Ossetia.

Merkel has been sharply critical of Russia’s actions in the Caucasus. But she has stood out in the European Union by pressing for the lines of communication with Moscow to remain open.

The talks will focus on sensitive areas including fighting crime and terrorism and coping with the turmoil on international financial markets, a senior German government source said.

“Iran is also an area that must be discussed in terms of how we move forward,” the official said on condition of anonymity. German diplomats note that the Caucasus war in August opened a number of rifts complicating further diplomatic cooperation with Moscow and said they hoped the broad-based consultations would help smooth things over.

Citing tensions with Washington, Russia pulled out of a meeting last week at the UN General Assembly of foreign ministers from the six world powers working to resolve a crisis over Iran’s disputed nuclear programme. German vice-chancellor and Foreign Minister Frank-Walter Steinmeier scrambled to bring Moscow back to the table and the group—which also includes Britain, China, France and the United States—finally agreed on a new UN Security Council resolution confirming sanctions against Tehran.

And they will touch on an EU summit this month debating the resumption of negotiations with Russia on a new partnership and cooperation pact. Merkel will also travel with an industry delegation including the German energy agency president, the chief executives of chemicals behemoth BASF and engineering giant Siemens, and the head of the Committee on Eastern European Economic Relations, which represents German exporters. It was unclear whether any new deals would be inked during the one-day consultations in the former tsarist capital.

But the meetings come at a time of burgeoning trade between the wartime foes and heavy German dependence on Russia for oil and gas. The two countries’ economy ministers are to focus on a “partnership for innovation” to help Russia improve its energy efficiency, a German source said. Ministers are also to seal an “action plan” on health care facilities and treatment.

“This is of major importance for Russia because it has huge deficits in this area and Germany has the corresponding know-how,” the source said. German exports to Russia jumped 23 percent in the first half of this year to €15.8 billion ($22.3 billion), according to the Committee on Eastern European Economic Relations. Russian exports to Germany in the same period totalled €16.7 billion.

Some 4,600 German firms have subsidiaries in Russia and every fourth machine imported by Russia is Made in Germany.