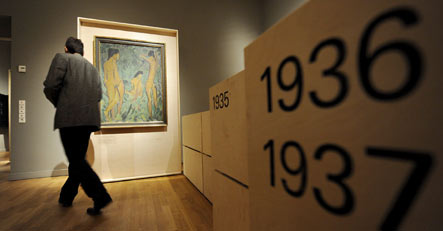 “Looting and Restitution: Jewish-owned Cultural Artifacts from 1933 to the Present,” at the Jewish Museum Berlin until January 25, focuses on 15 different pieces plundered from Jewish families during World War II. Using photos and documents of the time, the show not only sets up the historical context but looks at who profited from or played a role in the looting, including at times disreputable dealings by museums, libraries and art dealers. It also examines efforts after 1945 to restore the works to their rightful owners.

“We are addressing highly emotionally charged questions, issues which can be very divisive,” said museum director W. Michael Blumenthal. “At the same time, we wanted to be careful not to favour either side. We wanted to show the facts, show them with historical objectivity and show the current situation,” Blumenthal told a news conference. The show’s explanatory notes are written on wooden boxes like those that might have been used to move the stolen property, which ranges from paintings to porcelain, silverware, entire libraries and private photos. One is a painting by expressionist painter Otto Mueller, one of 18 works belonging to the widow of Jewish art dealer Ismar Littmann confiscated by the Gestapo in 1935.

Littmann had committed suicide a year earlier after the Nazis barred him from practising law, taking away his sole source of income. His widow was about to auction the painting to help make ends meet for herself and her children when it was seized.

Some of Littmann’s works were destroyed on grounds that they were “degenerate,” but “Boy with Two Standing Girls and One Sitting Girl” was exhibited in Munich and then sold on by the Nazis.

Littmann’s family spent years trying to recover the piece before finally securing documents in the 1990s that proved its provenance. A legal battle ensued and the painting was finally returned to them in 1999. The loser, in this case, was an art foundation that had bought the piece in good faith in 1979, apparently unaware of its murky past, to display in a German museum.

Inka Burtz, one of the show’s curators, said it is impossible to estimate how many artworks in galleries, museums and homes around the world might still be subject to ownership claims.

But such cases have multiplied in recent years. In 2006, for example, there was a minor uproar when Berlin’s Bruecke Museum was forced to return “Berlin Street Scene” by German expressionist Ernst Ludwig Kircher to the former owner’s descendants. The family then quickly sold it at auction in New York for 38 million dollars (26 million euros). It was one of several works to go under the hammer in recent years after they were returned to the heirs of those robbed by the Nazis, prompting accusations that auction houses were stirring up trouble in order merely to pocket millions of dollars in commission at auction. Given the controversy over such claims, the show offers visitors their own say with a novel interactive video game.

Participants can choose to hear the point of view of the families bereaved of property or the museum director faced with a reclamation order. “If you were in their place, what would you decide?” asks the game’s narrators. And the answers are not always clear-cut.