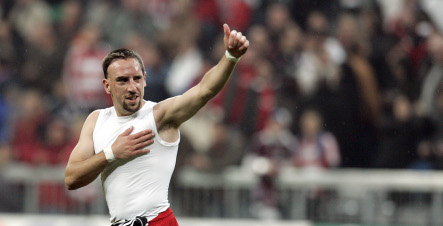 Having spent the summer recovering from the ankle ligaments he tore during Euro 2008, Ribery came off the bench for 25 second-half minutes in Wednesday night’s 2-0 German Cup win over Nuremberg.

Now the 25-year-old Frenchman wants 90 minutes against Hannover on Saturday to recover his match fitness for Bayern’s Champions League game in Munich next Tuesday and fire his side back up the table.

“I would like to play from the beginning against Hannover, so that I can recover my fitness 100 per cent,” said the French midfield maestro. “I am relieved there were no problems with the ankle and I want to get back to the old Franck Ribery as quickly as possible.”

Bayern’s confidence was battered last weekend when they were humiliated 5-2 at the Allianz Arena by Werder Bremen and the German giants face a tough schedule with three games in seven days next week.

“It is a situation where we will rotate players to keep the squad fresh,” said coach Jürgen Klinsmann.

Having hammered Bayern last week in Munich, Werder Bremen have a great chance to get back amongst the leaders at home to second-placed Hoffenheim on Saturday. Germany midfielder Torsten Frings has shaken off a knock and is expected to play while Danish striker Daniel Jensen is hoping to put his achilles tendon injury behind him.

Hoffenheim were dumped out of the German Cup 3-1 by second division leaders Freiburg in midweek. But but having hammered Dortmund 4-1 last weekend in the Bundesliga to take second, Hoffenheim coach Ralf Rangnick wants three points from Bremen.

Their Bosnia and Herzegovina striker Vedad Ibisevic is one to watch as the Bundesliga’s joint top-scorer with six alongside Bayer Leverkusen forward Patrick Helmes.

With just one defeat in their last nine games, VfB Stuttgart are up to third in the table and they travel to Borussia Dortmund on Saturday. Stuttgart striker Cacau and Ciprian Marica both scored in the 2-0 win over Arminia Bielefeld in the German Cup on Wednesday, but goalkeeper Jens Lehmann has warned against complacency.

He said: “We played well against Bielefeld, but that could all change at the Westphalen-Stadium on Saturday because Dortmund need a result and we want

On Sunday, VfL Wolfsburg, who are up to sixth in the table and smashed minnows Oberneuland 7-0 in the German Cup on Wednesday, travel to strugglers Karlsruhe and Eintracht Frankfurt are home to Bielefeld.