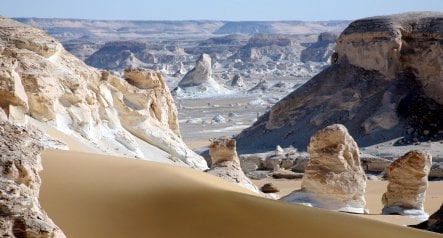 “The kidnappers have asked for the German government to be the only ones to be responsible for paying the €6-million ransom as the condition for releasing the hostages,” the official told AFP, asking not to be named.

The group of five Germans, five Italians and a Romanian, as well as eight Egyptian drivers and guides, was snatched by masked bandits while on a desert safari to view prehistoric art in Egypt’s remote southwest on Friday.

Egypt has said Germany is heading negotiations via the German wife of the Egyptian tour operator who is among the missing. Berlin has only said it has set up a kidnap crisis team.

“The €6 million are to be given to the German wife” to bring to the kidnappers, the official said.

Several different ransom figures have been cited since the group was first reported missing on Monday.

The bandits have taken the group across the border into Sudan. Sudan has said the group is being held 25 kilometres (17 miles) inside its territory at Jebel Uweinat and that Sudanese forces “are besieging the area.”

Khartoum has said it has no intention of storming the area “so as to preserve the lives of the kidnapped persons.” Elderly travellers in their 70s are among the hostages being held in the desert, where daytime temperatures can hit 40 degrees Celsius (104 Fahrenheit) even in September.

Authorities only became aware of the abduction when the tour group leader phoned his wife to tell her of the ransom demand.

Kidnappings of foreigners are extremely rare in Egypt, although in 2001 an armed Egyptian held four German tourists hostage for three days in the Nile resort of Luxor, demanding that his estranged wife bring his two sons back from Germany. He freed the hostages unharmed.