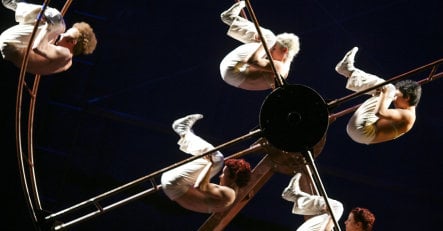 From a serene image of bathing beauties in the 1930s, to a 1964 shot of a snakeskin-clad Veruschka tying up a rhinoceros, this exhibition provides an overview of how fashion photography has developed over the last century. Over 250 works by 65 photographers like Diane Arbus, Richard Avedon, Annie Leibovitz, Man Ray, Lee Miller, and Steven Meisel are on view.

When’s the last time you had a good laugh? The English speaking comedy troupe Laugh Olympics kicks off a season of funny antics and jokes Saturday night. Giggle ’til it hurts.

Iraq – The Space Between

Women cloaked in black. Soldiers in desert fatiques. Empty playgrounds, dusty landscapes. Evidence of violence is everywhere, but an eerie aura of calm pervades. “It describes the gap between different peoples and cultures in Iraq,” says Christoph Bangert about his book Iraq – The Space Between. Meet the photographer Friday night at the exhibition opening.

Carve a pumpkin among an autumn wonderland of sunflowers and gladiolas this Saturday as the Frankfurt Palmengarten hosts its annual Herbstfest. Music, seasonal refreshments, and vendors selling local products add to the spirited atmosphere.

These three Swiss damsels belt out catchy love songs like a 1960s soul-pop trio. Check them out Sunday night at Hamburg’s Molotow Club.

This year’s festival features sections devoted to Portugal and France. Sensational cinematic gems are shown in their original language, with either English or German subtitles. Lots of great flicks for the kids too including “31 Minutes, The Movie,” based on the popular South American TV series, “The Paper Prince,” from Serbia, and “Butterflies” from Sweden.

Walt Disney’s Wonderful World and its Roots in European Art

By showcasing classic scenes from Disney movies like Fantasia and Alice in Wonderland alongside works by German Romantics and French Symbolists such as Henri Rousseau and Heinrich Kley, this exhibition explores Walt’s early avenues of inspiration, and reveals how deeply rooted in European art they were.