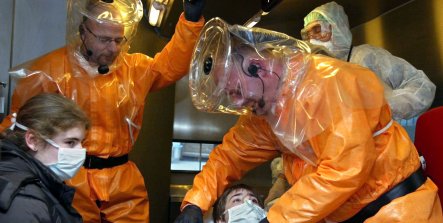 The country’s energy dependence is so great that it could not insure the safety and primary health care of its citizens in the case of a massive power outage, the study said. Police and rescue services rely heavily on computers, which would cripple their efforts if there were a power outage for several days, and there is no crisis management plan to remedy the situation despite the frightening European blackout of 2007.

Germany has also failed to institute a plan for widespread health epidemics, aid organizations, doctors, and police who worked on the study complained. Low medicinal inventories and personnel shortages would render the country “completely overwhelmed” if a virus broke out.

In many cases it is not clear who is responsible for different aspects of state security, Free Democrat (FDP) politician Hartfrid Wolff said, adding that he recommends a “reconstruction” of the country’s security system.

The German Interior Ministry, which has overall responsibility for coordinating national disaster relief efforts, said it welcomed the broader public debate the study might stoke. “We see the general intention of this study as positive,” a ministry spokesman told The Local on Tuesday.

He also explained that since crisis management is a state responsibility, it’s crucial to optimize a nationwide response with the federal government. “The Interior Ministry has contributed to legislation likely to be passed by the cabinet in October, but ultimately the authority for such efforts will continue to lie with the states,” he told The Local.