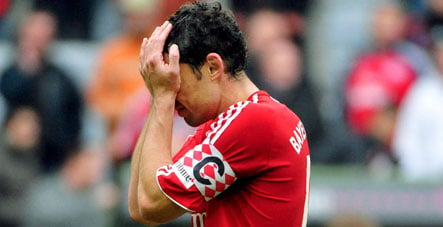 Bremen’s teenage midfielder Mesut Özil, 19, provided the two final passes which helped put Bremen 2-0 up at half-time at Bayern’s Allianz Arena and the Germany Under-21 international then bossed the midfield to crush the hosts. Sweden striker Markus Rosenberg scored goals either side of half-time to leave Bayern’s dreams of going top of the league in tatters and put them fifth in the table.

“That was a black day. Bremen were better, more spirited and more aggressive than us,” Klinsmann told German television channel Premiere. “They were brighter and more intelligent. From this we can only learn, we can’t bury our heads in the sand, we have to improve.”

But with Munich’s Oktoberfest – the world famous beer festival – starting this weekend, there will be some glum faces around the city’s beer halls. “I don’t envy you, you need to drink a few large glasses of beer tonight – that is the only solution,” glum-faced Bayern president Franz Beckenbauer told Klinsmann on Premiere.

Bayern were missing injured Germany striker Miroslav Klose and French midfielder Franck Ribery, but were second in the table before this weekend. In contrast, Bremen only managed their first league win of the season last weekend, but last season’s Bundesliga runners-up dominated the champions.

“We won three points, which are very important for us,” said Bremen coach Thomas Schaaf. “It will give us a confidence boost to beat such a strong club as Bayern and I congratulate my team, but I will expect the same thing in future.”

A well-timed pass from Özil after half an hour split the Bayern defence and Rosenberg flicked the ball past Bayern goalkeeper Michael Rensing to put his side ahead. On 45 minutes, Özil floated his free-kick over the Bayern defence and Brazilian defender Naldo fired home from just metres out after Rensing blocked a shot to make it 2-0.

After the break, Bayern coach Klinsmann brought Germany midfielder Tim Borowski and Italian defender Massimo Oddo into the fray. But it was soon 3-0 when Özil unleashed a superb shot which beat Rensing at the near post on 54 minutes. And Rensing’s embarrassment was only heightened on 59 minutes when Bremen’s former Bayern striker Claudio Pizarro poked the ball under him to make it 4-0.

Another Rensing mistake made it 5-0 when he tried to punch the ball away, but Rosenberg was on hand to stab the ball home on 67 minutes. Borowski pulled goals back on 71 and 85 minutes with two well-taken strikes, but it was far too little, too late as Bremen moved up to fourth.

Schalke 04 went top thanks to an own goal at home to ten-man Eintracht Frankfurt. Brazilian defender Chris was sent off on 34 minutes for assaulting Germany defender Heiko Westermann.

And on 41 minutes Frankfurt’s misery was complete when Patrick Ochs tackled Schalke striker Jefferson Farfan in the area only to slide the ball under his own goalkeeper.

On Sunday, VfB Stuttgart host Karlsruhe as Borussia Dortmund travel to Hoffenheim. Second-placed Hamburg have the chance to regain the league’s lead when they travel to Wolfsburg.

On Friday, Bayer Leverkusen’s Patrick Helmes scored a hat-trick in their 4-0 home victory over Hanover 96 which left them third in the table.