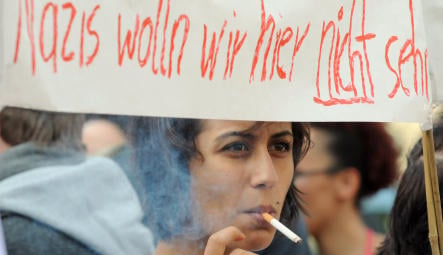 The rally was organized by the xenophobic Pro-Köln (For Cologne) group, which said on its website that supporters from across Europe were coming to the city.

hose expected at the Cologne congress include Filip Dewinter, head of Belgium’s far-right Vlaams Belang party, and Andreas Mölzer, the Euro MP once ejected from Austria’s Freedom Party for being too extreme. Also due to add his support to what organisers call Europe’s “shared, thousand-year history”, identity and “Western values and Christian traditions” was Mario Borghezio from Italy’s anti-immigration Northern League.

Pro-Köln supporters, under watch by Germany’s domestic intelligence agency, were met with whistles and paint bombs hurled by about 100 leftist activists, and there was an incident between the right-wingers and activists in the city’s Rodenkirchen district. But no one was injured, police reported.

At the last minute, police also refused permission for a bus full of the anti-Islamic demonstrators to tour through multicultural areas in Cologne, calling it a “provocation.”

Though the first day of the congress was largely peaceful, police said the right-wing extremists have used “intentional tactics and false messages” to create a “dangerous situation,” and the atmosphere is tense. Eight counter-demonstrators have been arrested so far.

Mayor Fritz Schramma, whose city council recently gave the green light for the construction of what will be one of Europe’s biggest mosques, has called on the city’s inhabitants to show the far-right “the cold shoulder.” Several hundred citizens staged a peaceful demonstration in front the mosque lot bearing signs that read “Temple, synagogue, church – all are OK.”

The US Embassy issued a statement advising Americans to “defer non-essential travel to Cologne at this time.”

Those attending the conference may find it hard to get a glass of Cologne’s famous Kölsch beer, with 150 of Cologne’s bars putting up banners promising “No Kölsch for Nazis.” Some 200,000 beer mats have also been printed with the same message.