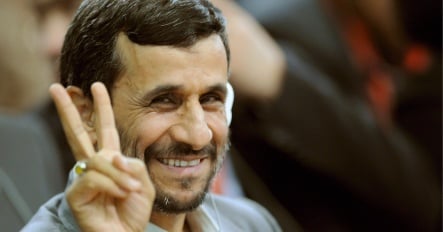 “A substantial offer from the EU is on the table. We are still in talks with Iran to receive a concrete and, we hope, positive response to this offer. This has until now still been lacking,” Plönter said when asked about the calls for sanctions. “Should there be no progress on the negotiations track, the German government believes the UN Security Council will become more relevant again and discussions will have to be held on possible new resolutions,” he said.

“This is not the track we are seeking – we want progress from negotiations. But unfortunately what we have seen until now has not made us optimistic.”

Germany is one of six world powers attempting to convince Iran to halt sensitive nuclear work with an incentives package in exchange for full suspension of uranium enrichment. The United States, which fears Iran is trying to build a nuclear bomb, told Tehran Monday that it faced possible new UN sanctions over its nuclear programme. France echoed the call.

But China, a veto-wielding permanent member of the Security Council, argued Tuesday that fresh sanctions would not resolve the stalemate.

Foreign ministers from the six powers are to meet next week on the sidelines of the UN General Assembly but German diplomats do not expect to agree on a new draft resolution for possible sanctions during the meeting.